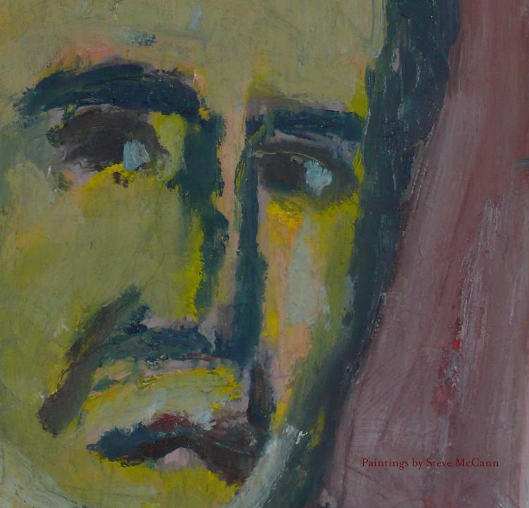 “I don’t know how you do it” said Leon Kossoff to Steve McCann on their last meeting. One wonders if the great painter was not in fact asking his adopted mentoree for instruction himself. “Tell me how, how do you do it?”

I meet McCann at his studio flat in Hackney. And it is far more studio than flat with paintings hanging and stacked in every conceivable manner, congesting all available space; corner, floor and wall. Four large canvases stand in the bath. It is testament to a life devoted, where comfort is sacrificed and art is not merely accommodated but resides and lives. Think of those iconic images of Francis Bacon’s studio and you’re nearly there but remember there is no Soho drinking club or apartment to retire to.

Yes, there have been hardships but McCann is keen to play these down. They are not the reason he began to paint though alcohol addiction and homelessness brought him to the doors of the Whittington psychiatric unit in the late 70’s where he was first afforded the time and resources to begin to paint in earnest. His involvement and passion for painting, however, began before this period when he befriended graphic artist David Browning. Browning had designed the cult album cover The Story of Simon Simopath for the band Nirvana (the other Nirvana of English 60’s psychedelic obscurity). But this was 1975 and the hippy dream was long over.

Browning’s was a basic but broad tutorship from the stacks of DC comics in his Islington flat, to the books, courtesy of Thames and Hudson’s pocket art series, that he gave McCann, along with gallery visits. Kenward house in particular, where the two stood in awe of Rembrandt’s self portrait. “How did he do it?”  The question echos. How? McCann, modest in his manner, dismisses any magic, mystery or myth of his own artistic gift. “I just happen to be a painter, I could just as easily have been an electrician”. It is a dry comparison that he comes back to later when I clumsily bring up suffering, the dark clouds dominating an urban landscape he is currently working up in oil. “Life has been tough, dreadful at times. Dark days with drink and drugs – I go on paint benders now” he smiles. “Who knows what problems and tragedies an electrician, say, may bring with him to a job. But he isn’t expected to reflect it in his work.” Think of McCann then as an electrician. Making connections, conduit from source to appliance, a constant and consistent current moving through him. There are tremendous surges of energy too and fuses blow when the paint flows directly from the tube, marks spark, and a low voltage hums and buzzes in his paintings that to date have seen only two solo shows and a singular submission accepted by the RA.

McCann’s is not a story of an artist working in isolation however. “I wrote to Frank Auerbach on his 70th birthday and he wrote me back with a critique of my work.” McCann treasures these correspondences and they are evidence of his continuing investigation into the development of his own craft. He still attends life drawing classes. It was a model he met, while studying at Byam Shaw School of Art, who put him in touch with Kossoff in the first place. Their mutual admiration of each other spans decades and prompts Kossoff’s question.

“I paint because it excites me.” McCann says finally “It reminds me of the vitality of life.” He stretches out on an old sofa, cradling a box and tapping its top. It is a jigsaw puzzle. Leonardo’s The Last Supper. And McCann is holding all the pieces.